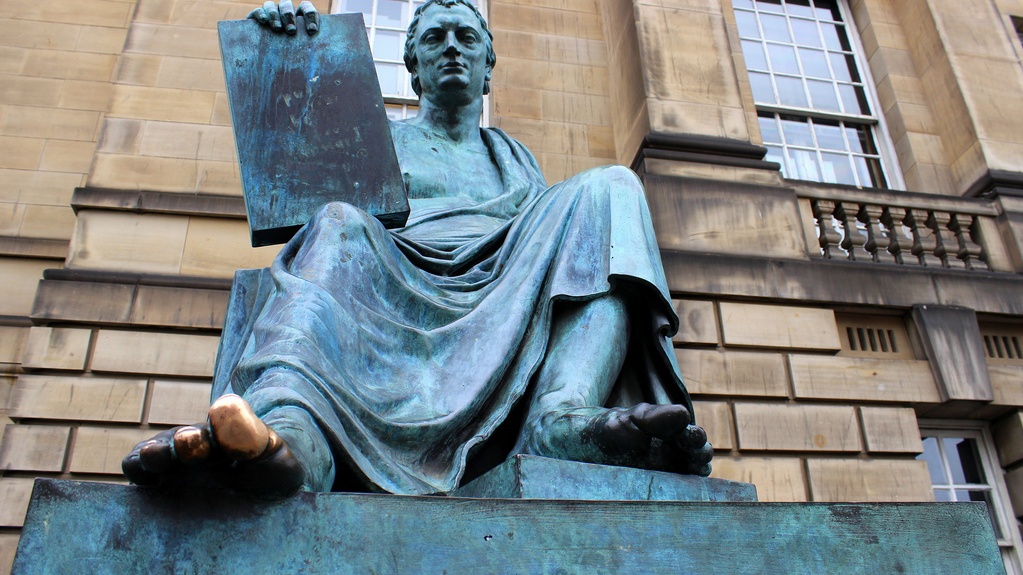 “Reason is the slave of passion”

David Hume was an influential 18th century philosopher/historian who is famous for his works developing the early forms of skepticism, empiricism, and inductive reasoning. He was influenced by great thinkers before him like Isaac Newton and John Locke, Hume built his ideas on the foundation laid by these men, that the aim of science is not to achieve an ultimate understanding of everything, nor to attain absolute certainty, which is impossible. All we can work with is probability, what’s the most likely possibility that explains phenomenon occurring in the world around us.

Hume said that we as humans are much more driven by our feelings than any abstract concepts like logic or rationality. A feeling is immediate, intense and all consuming, much more moving and convincing than feeble attempts at supposed rationality. Hume noticed that we tend to use reason in a way that tries to justify our pre-existing beliefs and convictions, rather than using reason as a way to determine the most logical conclusion.

Hume believed that to convince someone to change their misguided beliefs on a subject, you simply cannot state the facts and argue with them like a university professor would, this is not an effective way to make them change their minds. Instead we must use more emotionally driven techniques such as being sympathetic, understanding, and reassuring to them.

Even though he was an empiricist, Hume believed that it’s perfectly acceptable to hold on to our beliefs and convictions, since they are what helps us make sense of the world, and our place within it. Hume thought that the merit of a belief doesn’t come from its logical truth, but from it’s utility and usefulness in our lives. Trying to be 100% rational and skeptical about everything including feelings and emotions is an unreasonable and ultimately fruitless endeavour. This is also why he strongly believed in religious tolerance, even though he was likely not a believer himself. He saw religion not in the framework of logic, facts and evidence, but as a group of emotionally driven people trying to make sense of the world from their own perspective and stories. This is why Hume thought that trying to have a rational argument over religion achieves nothing. They should be left in peace provided their beliefs are not harmful.

“While we are reasoning concerning life, life is gone”

Hume thought that our pursuit in life should be to focus on exercising control over our emotions rather than trying to make our minds as logical as possible. This is because reason is a slave to passion, no matter how much we try to guide ourselves with reason, what’s ultimately in control is our fleeting emotions. But not all feelings are good or even acceptable, Hume also realizes that a person can be incredibly smart and rational, and yet they can be not nice people at all. This is because having great intellectual capacity does not mean you are sensitive to the suffering of others, that you can behave in a gentle way, or are skilled at keeping your temper. This is why Hume advocated for an “Education of the Passions”, where the education system teaches students to develop and control their emotions, teaching them compassion, patience and self-determination, rather than only addressing the narrow academic side of things.

David Hume is a hugely influential figure in philosophy. He inspired many great thinkers that came after him, such as Adam Smith, Jeremy Bentham and Charles Darwin, just to name a few. This writing only encapsulates a tiny bit of his contributions to the world, and there’s much I didn’t have time to cover in this piece. So I’ll end this post with a quote from David Hume;

“Be a philosopher, but amidst all your philosophy, be still a man”