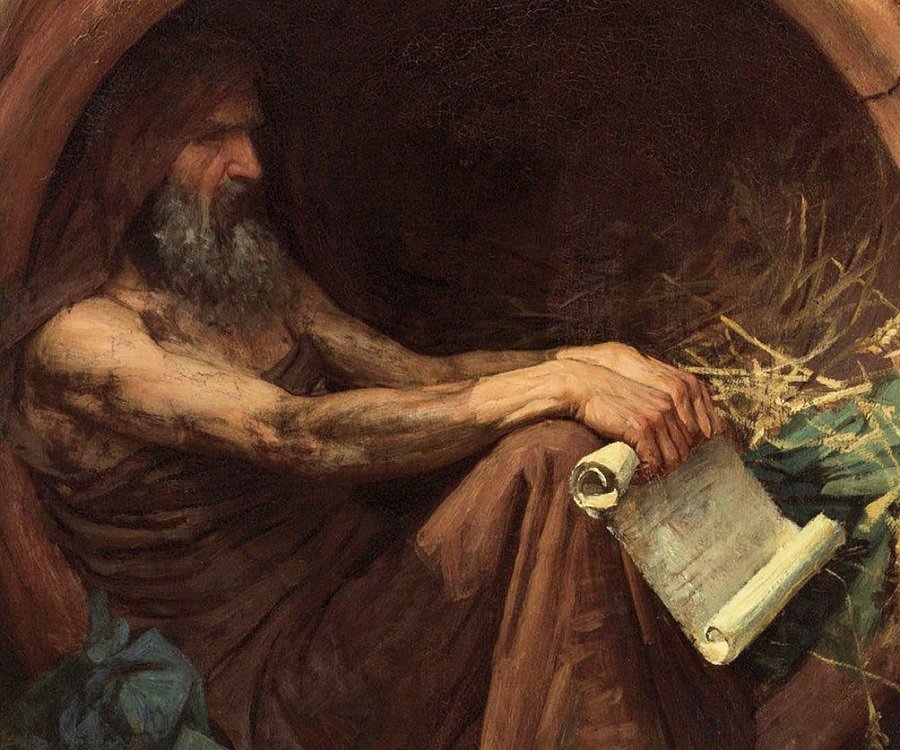 He has the most who is most content with the least.

Diogenes was an Ancient Greek Philosopher that is famous for his unusual outlook of life, Cynicism, which sets aside conventional desires for a simple lifestyle. He chose to live like a shameless beggar, criticizing those who have become superficial, delusional and vain.

He lived in a tub in the middle of a marketplace in Athens, and his sole possession was a wooden bowl which he used to eat and drink with, until he saw a young boy drinking from his hands, and he threw away his bowl, staying true to his way of life.

Diogenes would eat and perform ‘bodily functions’ right there in the marketplace, in full view of everyone else, under the full pressure of the current societal norms and conventions. When he was eating, a passerby called him a dog, and Diogenes shot back “It is you who are dogs, standing around and watching me eat my breakfast.”

Unassumingly, Diogenes was a very smart man, having a sharp mind that can (and does) challenge and roast the most pompous of scholars and philosophers. He was critical of his philosopher peers, mainly Plato (Socrates’ student).

One time, Plato was trying to define a human being with the simplest term possible, he therefore defined man as a “featherless biped”. Diogenes heard this and hurriedly rushed to Plato’s Academy, brandishing a plucked chicken, exclaiming “Behold, Here is Plato’s man!”

Once Plato was discussing his theories, pointing to the cups on the table, he said that while there are many cups in the world, there is only one `idea’ of a cup, which he defined as a “cupness”

Diogenes was present here, and said “I can see the cups on the table,but I can’t see the ‘cupness’”.

“That’s because you have the eyes to see the cup,” said Plato, “but”, tapping his head with his forefinger, “you don’t have the mind to comprehend the`cupness’.”

Diogenes walked up to the table, picked up a cup, looked inside and asked Plato, “Is it empty?” Plato nodded. “Where is the ’emptiness’ that’s in this empty cup?” asked Diogenes. Plato thought hard for a second, but Diogenes reached over, tapping Plato’s head with his finger, and said “I think you will find the ‘emptiness’ here.”

Diogenes was also famous for his cutting satire. When he was asked if he believed in the Gods, Diogenes replied “How can I when I see a god-forsaken wretch like you?”.

and once when Diogenes saw that a prostitute’s son was throwing rocks at a crowd, Diogenes remarked “Careful son, don’t hit your father”

He basically does not care at all about what the rest of society thought of him, and uses it to his advantage, making himself known throughout the cities. He is the equivalent of the ultimate internet edgelord in Ancient Greece.

Another famous encounter that Diogenes had was with King Alexander the Great, one of history’s most famous bloodthirsty conquerors. Alexander had heard of Diogenes’ reputation, and met him in Corinth. When he saw Diogenes hanging around the marketplace, sitting in his tub, Alexander stood before Diogenes and asked, as a wealthy and powerful ruler, that if there’s anything he can do for him, he needs only to ask,

which Diogenes replied “Yes, stand out of my sunlight”

this reply made Alexander respect Diogenes even more, saying “If I was not Alexander, then I should wish to be Diogenes”

and the philosopher quips, “Were I not Diogenes, I would wish to be him as well”.

This encounter continues, Diogenes asked the King what his plans are, and Alexander replied “I plan on conquering Greece, then all of Asia Minor, and eventually the whole world”,

“What then?” Diogenes asked.

“I suppose I would relax and enjoy myself,” said Alexander, not expecting the question.

Diogenes remarked, “Why not save yourself a lot of trouble and enjoy yourself now?”

There is another darker retelling of Alexander the Great and Diogenes, once Diogenes was rummaging around in a pile of human bones, Alexander saw this and asked him what he was doing, Diogenes said “I was searching for the bones of your father but cannot distinguish them from those of a slave”.

Diogenes also had an unfortunate run in with pirates, and was captured and made into a slave. He didn’t have much of a problem with this, claiming “lions are not the slaves of those who feed them, but rather those who feed them are at the mercy of the lions”

When he became old, Diogenes was advised to rest more, to take it easy. Diogenes said “What, if I were running in the stadium, ought I slacken my pace when approaching the goal? Ought I rather put on speed?”

At the end of his life, Diogenes was asked if he would mind if his body was left outside to be devoured by animals, and he replied “Not at all, as long I’m given a stick to defend myself”, the people asked back “How can you use the stick when you lack awareness?”, and Diogenes replied “If I lack awareness, then why should I care what happens to me when I’m dead?” Basically, what he wanted was to be thrown in the trash when he dies.

It’s not known how Diogenes finally died, some say he was bit by a rabid dog, another said he ate raw octopus, the best story I’ve read is that one day, Diogenes just got tired of living, so he held his breath until he died.

Sadly Diogenes spends his days roasting high members of society, and doesn’t spend any time writing down his ideas and thoughts. So does not have any surviving written teachings, most of what we know about him is from other people who have encountered his eccentricity. Diogenes will always be remembered as a crackpot satirical philosopher who challenged social norms and expectancies. He truly lived his own Cynicism philosophy.

While I don’t agree with Diogenes’ lifestyle and philosophical outlook, I have massive amounts of respect for him because he was so unexpected, a beggar who has the mind of a philosopher, who wasn’t afraid to step out of line and challenge others face to face, intellectually owning them in the process.